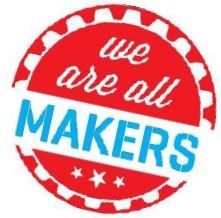 In mid-2014, our office was introduced to the concept of a Maker's Space by Sam Monson. At the time, Sam was an 8th grader here in Wenatchee, and he wanted us to know the importance of having a Maker's Space in Wenatchee and he had done the research. See his video here. Talk about inspiration! Our staff began to investigate and talk with local economic development practitioners, entrepreneurs, Wenatchee Valley College and others, who believed the time was right to think about encouraging Makers in Wenatchee, and with Wenatchee's agricultural heritage and spirit of hard work and entrepreneurship it made sense.  In mid-2014, we signed up for the White House Mayor's Maker Challenge (see link here) and we have begun a process to begin working through the deliverables. Our Mayor's Maker Forum was held November 20, where we celebrated the makers work in progress.  Here is a video from the event.

We are linked to the White House.  We're on the map!  Click here to view photos and interesting information on maker spaces.

Free viewers are required for some of the attached documents.
They can be downloaded by clicking on the icons below.