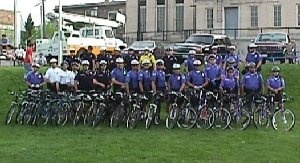 The majority of the Wenatchee Police Department’s full-time and reserve officers have been trained by the department’s two bicycle instructors. The department maintains a fleet of a dozen light-weight police bicycles that are used from spring into early fall.

It’s common to see officers day and night patrolling on bicycles at a number of places, including the following:

We have found public perception to be that officers on bicycles are more approachable. Officers have also found bicycles to be an effective tool in detecting both criminal acts and traffic violations.