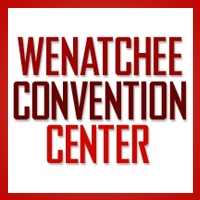 Welcome to the Wenatchee Convention Center.

The Convention Center is owned by the City of Wenatchee and operated by Coast Hotels Inc., which also operates the adjoining Wenatchee Coast Center Hotel. Coast staff provide management services including marketing, event planning and catering. Please contact the Convention Center staff to plan your next event in Wenatchee.

The Wenatchee Convention Center was constructed in 1980 through a $2.6 million Economic Development Administration grant. In 1989 the Plaza and Fountain were constructed at the southwest corner of the facility providing the first outdoor amenities at the Convention Center which spurred along the Downtown Streetscape Project. In 1997, 14,000 square feet of meeting, pre-function and exhibit space were added, as well as an 11,000 square-foot renovation of the facility's meeting space.

In 2011 the city installed two electric vehicle charging stations as part of the Stevens Pass Electric Highway initiative, and the region's electric vehicle initiative. The Convention Center is a key focal point of our community offering a central meeting place and a substantial investment of City of Wenatchee hotel-motel tax dollars. For more information contact the Mayor's office at (509) 888-6204.