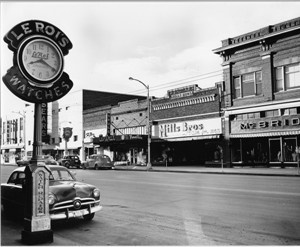 Historic Development of Wenatchee
Situated in a fertile valley in Central Washington at the confluence of the Wenatchee and Columbia Rivers, Wenatchee is the second most populous city in the central part of the state and serves as the Chelan County seat. To the south and west, mountains provide a dramatic backdrop for the City.

Wenatchee’s First Peoples and Euro-American Settlement
For thousands of years before Euro-American settlement, the area was inhabited by indigenous peoples who lived on the land. The Wenatchi were a nomadic culture and were closely bound to nature. They subsisted on salmon, roots, berries and nuts and interacted with other tribes.

The considerable amount of picturesque land available slowly attracted newcomers to the area. Beginning in ca. 1811, prior to permanent white settlement, nomadic fur traders of the British Northwest Fur Company (which later became part of the Hudson’s Bay Company) traveled through the upper Columbia River region, plying the waters of the great river and exploring the rugged wilderness for fur trapping and trading opportunities. The first non-Native American settlers were gold prospectors, Chinese miners, cattlemen, and missionaries.

The first “business house” was established in ca. 1867 by two men named Ingram and McBride. They operated a trading post in what is now Rock Island and conducted trading with the Indians. Other small businesses and a hotel soon followed.

Wenatchee’s population was 108 in May of 1891. By January of 1892, the population had increased to 300. The year 1892 was of great significance because of the Great Northern Railway’s decision to build its train depot about one mile south of Wenatchee, thus creating a new town.

The Great Northern Railway and the Wenatchee Development Company Build a New Town
Although located as a mid-point between Spokane and Seattle, the Wenatchee Valley was largely inaccessible because it is surrounded by mountains. Despite topographical limitations, the City's great potential as a productive agricultural region and business center did not go unnoticed. With this vision in mind, a group of Seattle businessman formed the Wenatchee Improvement Company in December 1890 to acquire property and build a town.

The Great Northern Railway would eventually help spur development of new towns and provide important transcontinental service for many communities along its vast route through the upper Midwest, northern Great Plains, and the Pacific Northwest. In early 1892, the Wenatchee Development Company, in close consultation with the Great Northern Railway, surveyed and platted the present site of Wenatchee. On May 6, 1892, this plat was filed with Kittitas County (Chelan County had not yet been created), and lots were placed on the open market the same month. Within five days, $100,000 worth of property was sold.

By the late 1890s, Wenatchee was growing considerably and the need for a new county became clear. Ellensburg was the Kittitas County seat, but was separated from the Wenatchee Valley by a range of mountains. It proved inaccessible during the winter except via Spokane or Seattle by railroad, making it difficult for Wenatchee citizens to make the trek to Ellensburg for business purposes. The state legislature created Chelan County in 1899, carving it out of the existing Kittitas and Okanogan Counties.


Wenatchee: Apple Capital of the World
By the late 1890s, the stage was set for Wenatchee’s economic and population boom. The Wenatchee Valley’s arid climate, rich volcanic soil, and proximity to the Columbia and Wenatchee Rivers proved to be an excellent combination for agricultural success.

Within a few years, the Valley was covered with row upon row of young fruit trees. Apples were shipped to all parts of the world, and more and more people, learning of ‘the valley of the apples,’ came here to stay. Within 25 years, Wenatchee became the center of the greatest apple-producing region in the world.

Although fruit-growing and its related industries dominated Wenatchee’s economy, other industries thrived as well. These included diversified manufacturing, farming, lumber, irrigation projects, some mineral development, steamboat transportation and shipping. Among these other enterprises, steamboat transportation and shipping were the most successful.

Wenatchee’s population steadily increased between 1910 and 1920 (from 4,050 to 6,324). By 1930, the population was 11,627, a gain of 5,303 people in 10 years, the most in its history up to that point. This boom reflected the City’s continued prosperity in agriculture. Cultural and civic development kept pace with industrial development, and all the fine institutions for a thriving community grew, including libraries, two daily newspapers, a good educational system, many churches, theaters, and a busy commercial district.

The City broadened its economic base after 1940 to include hydroelectric construction and electrical metal refining. The hydroelectric power created by the Grand Coulee Dam (completed in 1942) and Rock Island Dam (1932) made it possible for new industries to develop. The Aluminum Company of American (Alcoa) plant (1952) near Malaga, the Holden Mining Company at Lake Chelan (operated as the largest copper mine in Washington state from 1938 to 1957), and the Rocky Reach Dam (constructed in two phases in 1956 and 1969) were large employers in the area.

Currently, Wenatchee is the second largest City in Central Washington, drawing people from all over the region. The City experienced its largest population increase between 1990 and 2000, growing by more than 6,000 to a population of 27,856. Agriculture continues to play an important role in the economy and still provides a solid base.