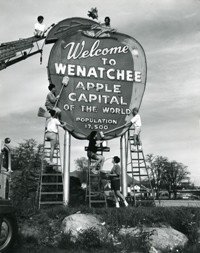 Since its earliest settlement, Wenatchee has identified itself with apples. This trend continues today, with apples appearing in the names of everything from appliance and machine shops to square dance clubs, churches and the town’s semi-pro baseball team. Second graders in the Wenatchee School District study an apple unit every year. Washington State’s Apple Blossom Festival has been held in Wenatchee each spring since 1920. Images of apples are found on signs, billboards, letterhead and logos throughout the Wenatchee area as evidence that residents remain proud of this heritage.

How did Wenatchee come to identify itself as the “Apple Capital of the World”? Has the City embraced other slogans or been known for anything else?

The word “Wenatchee” was taken from the area’s earliest inhabitants. The first people to live at the confluence of the Columbia and Wenatchee Rivers were Salish-speaking Pisquose Indians known as the Wenatchi. A.H. Sylvester, the first supervisor of the Wenatchee National Forest, related that Louis Judd, a Wenatchi living in Olalla Canyon, told him the word meant “Great Opening Out of the Mountain”. Sylvester quoted another historian’s translation as “River Issuing from the Canyon”.1 Various other meanings of the Indian name have been passed through the generations, according to John Gellatly’s 1962 book, A History of Wenatchee, The Apple Capital of the World. “One legend has it that the Indians’ definition for Wenatchee is ‘Place of the Rainbow’; another has it that it means ‘Meeting of the Rivers,’ and still another, “Good Place,’ or ‘Boiling Waters.’ Whatever the Indians had in mind, the fact remains that the name is unique. It has never been confused with any other because of similarity.”

One of the first white settlers in Wenatchee, Philip Miller, planted apple trees in 1872. The Peterson orchard, started in 1884, was the first commercial planting in Wenatchee.2 With the completion of the Great Northern Railway Company’s route across Stevens Pass in 1893, apples could be now shipped by rail to Seattle. The first carload of apples from Wenatchee to Seattle was shipped in 1901, 3 and the future looked bright for growers. The apples were so well received that by 1902, the Wenatchee community began proclaiming that Wenatchee was the “Apple Capital of the World” (The Night the Mountain Fell, 1973).

In 1906 Andy Gossman came to Wenatchee from Minnesota and established the Columbia and Okanogan (C&O) Nursery, supplying fruit trees to growers planting orchards. That year 60 carloads of fruit, mainly apples, were shipped out of the Wenatchee Valley. In 1910 the Wenatchee Commercial Club estimated the harvest would amount to 2,400 carloads.4 Clearly the tree fruit industry was off to a strong start in the first decade of the 1900s.

It was the Wenatchee Commercial Club that first started promoting the Wenatchee area as a center for apple growing. The club began in 1903 and soon included many prominent businessmen whose goal was to increase the City’s population and industrial development. They published brochures and booklets that called Wenatchee “The Home of the Big Red Apple, Where Dollars Grow on Trees”. In flowery prose, these publications described the beauty and productivity of the region. A 1908 booklet promised, “This is a place to make money with less effort and worry than in other occupations, and with a moderate investment a good income for life can be obtained. An apple orchard provides as sure an income as government bonds and more than 25 percent on the investment.”5

Another label the Wenatchee Commercial Club used for this alluring town in the eastern foothills of the Cascades was “Gateway to the Land of Perfect Apples”. In a 1910 brochure purporting to be “an informative summary for the Homeseeker and Investor,” H.O. Stechlan (a writer for The Republic, which published the brochure) praised Wenatchee’s suitability for fruit growing. He cited its deep and well-drained volcanic soils, abundant water sources, plentiful sunshine, protection from high winds, and crisp nighttime temperatures during fall harvest; concluding, “Hence it has come to be known as the land of perfect apples. This is not a boast but an established fact, based on the yield year-in and year-out, the prices obtained and the countless prizes won in numerous apple competitions”.

The Wenatchee Commercial Club (which was renamed the Wenatchee Chamber of Commerce in 1936) unapologetically pronounced the region as the source of the “Best Apples on Earth”.6 This apparently was sufficient documentation for the Wenatchee Daily World to proclaim the town “The Apple Capital of the World.” That slogan first appeared on the paper’s masthead on Wednesday, August 26, 1925, and has remained there ever since. No other region has challenged Wenatchee for that title. Anne Tilly, receptionist and hostess at the Washington Apple Commission’s Visitor Center in Wenatchee, has a simple explanation for the term: “We’re called the apple capital because we’re right in the heart of the nation’s best growing country”. A look at the large map on the Visitor Center wall confirms that Wenatchee is indeed at the center of a lush apple-growing region that stretches from Canada to the Tri-Cities.

In a study commissioned by the City of Wenatchee in the late 1990s titled “Wenatchee High Performance Community Strategy,” a consultant found that the claim to be the “Apple Capital of the World” was not only an advertising gimmick, but also a deeply-ingrained part of the community’s identity. Since the 1940s, welcome signs at the north end of the City have signified this area as the world’s apple capital. A recent sign, erected in 1980 by Terry Signs, was removed in the fall of 2006 because it was in disrepair. The City solicited replacement sign proposals, and invited citizens of Wenatchee to participate and vote on the design of the new Apple Capital of the World sign. Alcoa generously donated $30,000 to manufacture a new sign. In 2007, Mayor Dennis Johnson and the Wenatchee City Council selected Graybeal Signs to create the new signage that continues to welcome travelers to the City that well deserves the distinction of being the “Apple Capital of the World”.

SOURCES:
1. A. H. Sylvester in A History of Central Washington, ed. Lindley Hull, 1929.
2. Grace Miner, unpublished thesis in the University of Washington Library, “A Century of Washington Fruit,” 1926.
3. Al Bright, Apples Galore! History of the Apple Industry in the Wenatchee Valley, 1988.
4. Ibid.
5. “Wenatchee: The Home of the Big Red Apple, Where the Dollars Grow on Trees,” Wenatchee Commercial Club, 1908. From the collection of Wilfred Woods.
6. “Best Apples on Earth” now is the trademark of the Washington Apple Commission.