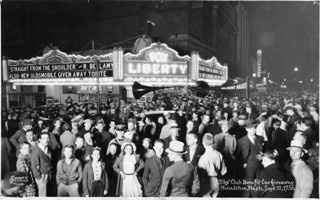 Although fruit-growing and its related industries dominated Wenatchee’s economy, other industries thrived as well. These included diversified manufacturing, farming, lumber, irrigation projects, some mineral development, steamboat transportation and shipping. Among these other enterprises, steamboat transportation and shipping were the most successful.

Wenatchee’s population steadily increased between 1910 and 1920 (from 4,050 to 6,324). By 1930, the population was 11,627, a gain of 5,303 people in 10 years, the most in its history up to that point. This boom reflected the City’s continued prosperity in agriculture. Cultural and civic development kept pace with industrial development, and all the fine institutions for a thriving community grew, including libraries, two daily newspapers, a good educational system, many churches, theaters, and a busy commercial district.

The City broadened its economic base after 1940 to include hydroelectric construction and electrical metal refining. The hydroelectric power created by the Grand Coulee Dam (completed in 1942) and Rock Island Dam (1932) made it possible for new industries to develop. The Aluminum Company of American (Alcoa) plant (1952) near Malaga, the Holden Mining Company at Lake Chelan (operated as the largest copper mine in Washington state from 1938 to 1957), and the Rocky Reach Dam (constructed in two phases in 1956 and 1969) were large employers in the area.

Currently, Wenatchee is the second largest City in Central Washington, drawing people from all over the region. The City experienced its largest population increase between 1990 and 2000, growing by more than 6,000 to a population of 27,856. Agriculture continues to play an important role in the economy and still provides a solid base.
View Full Site